Sacked over a century ago by raiding Orcs from Yashnag’s Kingdom, the fort known as Faldar’s Tooth has been left to decay ever since by the Jarls of Riften, who have had no need, or no funds, to rebuild it.

Faldar’s Tooth  delve is  located in central area of The Rift.  Nearest wayshrine is Honrich Tower  which is a short distance to the southwest.  It is one of the larger delves and consists of two “loops”.  Overall, a decent  place to find crafting materials, especially provisioning items. 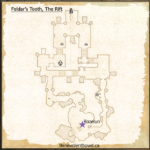