The first DLC game pack: Imperial City is here.  It comes in two parts: DLC game pack and the base-game patch. The follow is a review of the patch notes with a focus on crafting. 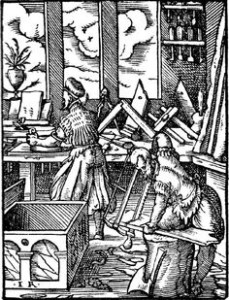 This review organizes the changes into fewer focussed sections to save crafters from have to review all of the patch notes to pick out those specific to crafting.

Here are the highlights

This motif can be earned by finding the ten Chapters or the Book for it.  The chapters will occassionally be found in equipment Writ rewards. To combine the ten chapters, you will require some Merethic Restorative Resin, which can be purchased from Mystic vendors throughout Tamriel. A Rank 10 in Metalworking, Tailoring, or Woodworking passives is needed in order to permanently learn the style. The style material called “Malachite Shards” can be found in the random Treasure Chests around the world. Treasure Map chests will have the best chance of finding them.  10 shards will make a chunk but a chunk will be bound to your account and will be untradeable.

A variant of the Daedric Style used by Molag Bal’s personal guard, the Xivkyn, is now available. There will be several chapters and they will be sometimes be found in well-warded chests in the Imperial City. The wards require dropped items from the Daedra inhabiting the city.  Rank 9  in Metalworking, Tailoring, or Woodworking passives is needed in order to permanently learn the style. The style material called “Charcoal of Remorse” can be purchased with Tel Var stones at Tel Var General merchants in your alliance’s base in the Imperial Sewers.

Three more ranks of bag upgrades are now available from the bag vendor. Max capacity will be 200 slots.